Do Not Adjust Your Sets… 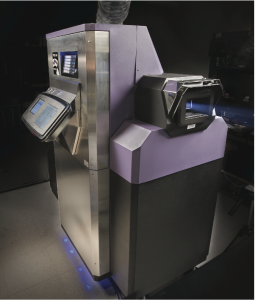 This past Tuesday I got to see a demo of Kodak’s new laser-based digital cinematic projector prototype. The venue itself was pretty impressive: Kodak’s “Theater on the Ridge.” When we entered the lobby my friend (and fellow cinema-geek) Paul said, “Did we just walk through a time machine to the 1950s?”, and he meant that in the best possible way. They just don’t make ’em like this anymore. The theater is a classic, enormous, and built-to-last… think late 50’s Cadillac (without the fins). 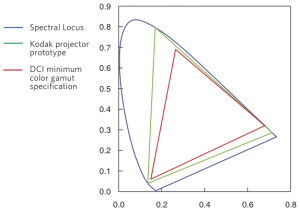 The color gamut of the Kodak laser projector extends quite far beyond the color gamut specified by the Digital Cinema Initiatives (DCI).

The second advantage of the laser projector is that it projects a wider range of colors than current film or digital projectors. This can be seen by comparing the color gamuts of the projectors on a CIE chromaticity diagram. The area within the blue “horseshoe” shape represents the full range of colors that the typical human eye can see. The area within the red triangle is the minimum required of current digital projectors. The Kodak projector (green triangle) greatly increases the range of colors, particularly for greens (the top point of the triangle) and reds (the right point of the triangle). It’s  startling to see a movie projector create reds and greens that are as vivid as a laser pointer, especially without the sparkly “speckle” effect one typically associates with lasers.

The final advantage of the Kodak projector is that, for 3D films, it is instantly twice as bright as anything else on the market. This is because the laser light is already polarized, whereas conventional projectors must use polarizing filters that throw away half of the light.

These three advantages, even taken together, probably wouldn’t sell many projectors. Both film producers and audience members are pretty content with the way things are. Kodak is instead trying to sell the technology as a long-term cost-saving to theaters, given that theaters are really more in the popcorn-selling business, rather than the movie-showing business. It turns out those darn projector light bulbs are expensive… like $1500 a (literal) “pop” for the high-intensity bulbs required for 3D films. Worse, those bulbs only last a few hundred hours. Solid-state lasers, on the other hand, are getting cheaper and cheaper and they last tens of thousands of hours.

One thing that disappointed me, though, is that Kodak has scrapped plans to produce the projectors themselves, and is instead seeking to license the IP. (There is a lot of really ground-breaking stuff going on in there–It is not easy to project a speckle-free image using lasers.) I would love to see a Kodak-branded projector, especially since the prototype was completely designed, fabricated, and assembled here in Rochester, NY. Business is business, though, and the technology probably has a better chance of adoption if Kodak licenses it to a variety of manufacturers rather than holding it to itself.