A month or so ago Lisa Grossman’s article “Plasmons Create Beautiful Holograms” at Wired caught my attention. The article highlights the work of a team of researchers in Japan who have developed a new way to illuminate color holograms (M. Ozaki, et al, Science 332, 218–220). The line in the article that grabbed me was:

“In a conventional hologram, if you change the angle, the color changes,” said optical physicist Satoshi Kawata of Osaka University in Japan. “Our hologram shows natural color at any angle you observe.”

Color reproduction is one of the key reasons why holography has not taken off commercially, and the above blurb makes it sound as if this new type of hologram solves that issue. After studying the original paper, though, my conclusion is that the importance (and veracity) of the angular insensitivity was overstated. In this blog post I will describe how holograms work, how the plasmon hologram does not really solve the angle problem, and why the research is cool anyway. But first a true story about why color reproduction is so important in holograms.

In 1994 I attended a week-long holography workshop taught by the inimitable Tung Jeong (“T.J.”) at Lake Forest College. “T.J.” has been the principal popularizer of holography for decades, and his lectures are peppered with personal anecdotes. One story that stuck in my mind was his tale of the making of  the 3D McDonald’s ad that formed the back cover of the December 1988 issue of National Geographic. That magazine was the first (and to this day only) magazine with a wrap-around hologram cover. (Here are photos of the back and front covers.) The back cover was a full-page holographic ad featuring a 3D McDonald’s restaurant.  The story goes, though, that was not the original ad. Apparently the original featured Ronald McDonald holding up a hamburger, but McDonald’s rejected it. Why? Because there was something decidedly unappetizing about a grinning clown sticking a glowing green sandwich in your face. The point: color matters, especially when it comes to advertising. 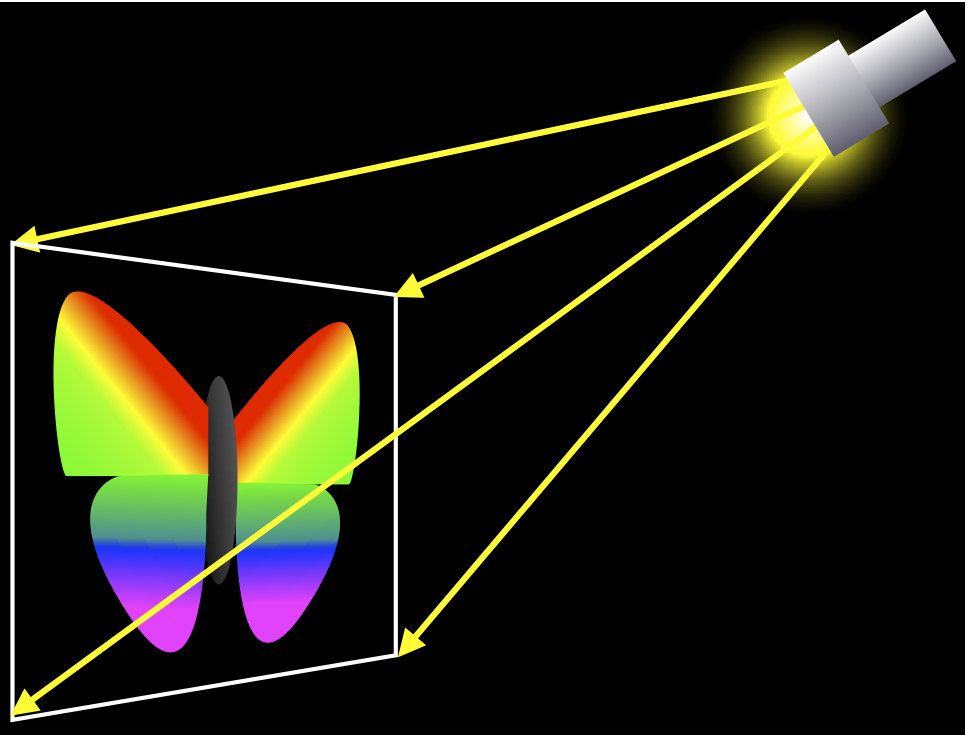 OK… back on topic. Let’s start by considering a “conventional” color hologram. (That nomenclature is already a bit of a stretch, as full-color holograms are hardly common.). Most full-color holograms are “reflection holograms”, meaning that the viewer is looking at light reflecting from the holographic film. To the right you can see a drawing of such an illumination system. I will skip the technical detail of how the hologram works, and instead draw attention to the two things the color reflection hologram does. First the hologram acts as a color filter, reflecting only the three colors (red, green, and blue) used to record it. Second, at each point on the film, the hologram recreates the three-dimensional wavefront of the light from the original object. The result is a three dimensional color image. For a color hologram it is critical that the illumination angle be “just right” or, as Dr. Kawata says, the color will change.

And that brings me to my first complaint about the quotes selected by Wired—The author does not specify that in the first instance Dr. Kawata is talking about illumination angle. Instead, when combined with the second sentence, it sounds as if he is talking about observation angle.

Color holograms do NOT shift color with observation angle! Don’t believe me? Check out the absolutely stunning holograms developed by Yves Gentet, as featured on his website Ultimate Holography. My favorite is this gorgeous hologram of a butterfly collection, which inspired the drawing above. In addition to the photos, the page includes a video of the hologram from multiple angles, and as you can see, there is no color shift. The problem with color reproduction in holography is tied to the strict requirements on illumination, not on observation angle. 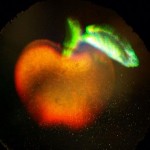 Now that we’ve got the core principles of color holography out of the way, I will move to the topic of these new plasmon color holograms. The picture to the left is a photograph of the “apple” plasmon hologram featured in the Wired article, and here is a video of the hologram as the observation angle is changed: 1201045s1. As you can see its color performance isn’t appreciably different the video of the Gentet butterfly hologram. So what is different? The “apple” hologram is being illuminated in a radically different method from conventional holograms. The drawing below illustrates the method. 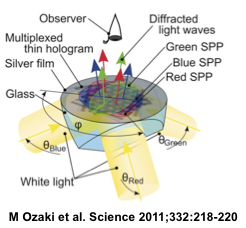 In this case there are three white-light sources illuminating the hologram from behind, each coming in from a different pair of angles theta and phi. That is already a peculiar illumination configuration… normally it would result in some kind of rainbow-colored mess because every wavelength of the white light would reconstruct an image at a slightly different angle. (See this great tutorial on white-light transmission holograms by Kaveh Bazargan.) Aside from three white-light illumination sources, that thin “silver film” between the light sources and the viewer is even weirder. According to the authors, it is 55 nanometers thick. Under normal circumstances that silver layer would reflect about 98% of the visible light, and you wouldn’t see much of anything! So, how are the researchers getting any image at all, much less such a nice color hologram? Something really special and interesting must be happening at that silver layer! Rather than being reflected by the silver, some of the light makes the electrons in the silver film move in a special kind of wave pattern called a “plasmon.” My colleague Greg “Dr. SkySkull” Gbur has a great tutorial article on plasmons, but for the purpose of this high-level review, it’s enough to say that plasmons are a “longitudinal wave” in the freely-moving electrons within the silver conductor. A longitudinal wave is like a compression wave in a Slinky™, with the electrons bunching up and then spreading out repeatedly. 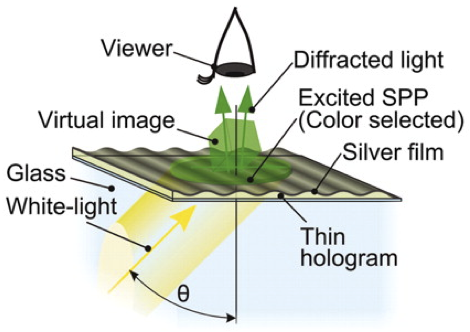 As you can read in Greg’s article, it’s quite tricky to excite plasmon using light. As Greg says, one method to get a plasmon started is “…to introduce surface features to the metal, such as surface roughness [or] a grating pattern…” That , patient readers, is the cleverness of Dr. Kawata’s research group. They realized that a conventional photoresist hologram would intrinsically have a wavy surface. By coating the hologram in a very thin layer of silver, plasmons can be excited in the metal, but only for a particular color coming in at a particular angle. The effect is that the plasmons act as the wavelength filter. To the right is a close up of the layer structure, showing the illumination for the green light only. What the Wired article glosses over is that the inclination angles of the illuminating light are critical. In particular, the “red” reconstruction beam must come in at 45.6°, the green at 48.6°, and the blue at 54.1°. Plasmon color holograms are therefore just as sensitive to incident angle as a conventional color hologram… perhaps even more so when you consider that the plasmon hologram requires three reference beams, rather than one.

There are still at least two cool things about this new type of hologram (aside from the fact that new forms of holography are always cool). First, to my knowledge, this is the first time that anyone has demonstrated a full-color, white-light-illuminated, transmission hologram. That may or may not have long-range implications on the feasibility of color holographic displays, as displays are generally backlit. Second, using plasmons to illuminate the hologram is just plain brilliant. In a sense, it is not the white light that is illuminating the hologram anymore—it’s the motion of the electrons in the silver. I am not a plasmon theorist, but to my mind that opens up the door to electronically addressable holograms, where there is perhaps no conventional “reference beam” at all. If that is possible, then it might solve the illumination angle problem that plagues color holograms. Furthermore it might reduce size and weight by eliminating conventional illumination.

All-in-all, even though I take issue with how this research has been spun for publicity, I think it still has fascinating scientific and commercial potential, and I really look forward to seeing where it goes from here.